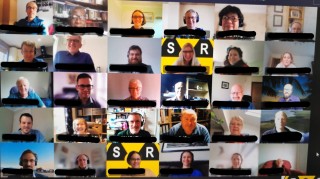 Regular readers will remember that last month I said I was getting a new job.  Well I am, but not the same one I told you about last month…

Just as we were going to press (or the digital equivalent), my company (Sellafield) announced the outcome of their RPA reorganisation and, as an RPA, I was reorganised. So I am now going to be one of two RPA team leaders on my site; this may not sound that fancy to those who work in single discipline teams, but we have, for many years, been integrating our RPAs into the conventional safety and more recently Environment and Safety teams. For example, my current job title is Environment and Safety Manager so my team includes Safety advisors (who do both RP and Conventional safety) as well as Environment Advisors. In a couple of weeks, I will be managing a team of RPAs and, for the first time in my career, only doing Radiation Protection. It’s going to be a bit weird to start with, but you could say that about any change.

At home we are limping gratefully towards half term and a break from attending work and school for a week. We tried booking a holiday twice, but both attempts have subsequently been cancelled so we’re staying at home and doing things locally. That may be in the house, depending on the unpredictable Cumbrian weather - and the fact it’s October.

We have started the Christmas preparations with the fruit for the Christmas cake bought and ready for baking into a cake over half term. We’ve also made a start on the Christmas shopping, as the earlier we start the sooner it’s done. No idea if Mr H’s brass band will get to do their usual Christmas Carolling, but they have been managing to rehearse in a COVID secure manner. It involves social distancing in the hall, towels on the floor for any drips from the instruments and covers on the end of the instruments. Yes, the instruments get masks.

In SRP world, we had the first virtual SRP AGM, which worked really well and meant anyone could dial in from anywhere – we had some members from Nigeria join, proving the benefit of the virtual meeting. The attendance was higher than average for an AGM and the meeting ran very smoothly and finished slightly early. All the appropriate business was covered, although I had to remind Pete that I was re-elected as part of the election results!

IRPA15 has been announced as a Hybrid event and we are in the process of sorting out our UK delegation. We may send the presidents, if safe and legal to do so, but the rest of us will be participating remotely. I am a little disappointed not to get to experience the cultural difference of South Korea and the buzz of an IRPA Congress, but with the current situation it is understandable. Instead, we will be taking part in the first virtual Congress which may lead to a different way of carrying out international collaboration if we ever get to a new normal. And I still have an SRP Poster on our Outreach work to write….

Early in the month was SRP Council and it was the first I had attended on MS Teams. The format seems to be working well and saves time and energy as I don’t have a nine hour round trip to London to attend the meeting. There are some down sides: it isn’t easy to have side conversations, which progress projects, or discuss matters informally and there isn’t the opportunity to gossip at lunch or coffee break like at a normal SRP Council. It’s also hard going to be in a remote meeting like this for most of the day. This is also now the standard way for SRP committees and working groups to meet.

It doesn’t look the weather will be kind for half term so we’ve dusted off the jigsaws and board games as it looks like it will be an inside week.

Stay Safe and be kind.