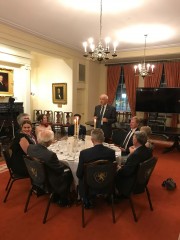 September brings the back-to-school temporary chaos with Mr H’s yearly part time teaching schedule change, and the kids afterschool clubs/activities restarting but not necessarily on the same day, meaning we all have a new routine to get used to. We will get into the rhythm of it, just a bit bumpy to start with. This year was all the more panicky as my eldest started senior school.

She was ready academically and, like thousands of other parents, we had done all we could to ensure she physically had everything she needed to start school. Unfortunately, we have no control over the school bus, which for the first three days was full when it arrived and therefore she couldn’t get on. The fourth day they finally sent a bigger bus. Drama over, but we are all now slightly suspicious of it and it feels like a celebration every day when it arrives.

To add to the stress of the time of year, we are in the middle of getting the house re-rendered. Sounds so simple, you pay people to take off the old stuff and replace it with new. But when you have a detached house over three floors, there is quite a lot of outside to strip and replace. The first removers did a rubbish job, broke the TV aerial cable and  didn’t last a week. The second set were better, but broke first the phone line (which we weren’t that fussed about) then the broadband. This happened just as I was about to start the SRP Engagement Directorate Board (EDB) meeting on MS Teams. Fuming is the best (polite) word to describe my response; thankfully it was reconnected within a few hours and EDB was rescheduled.

We had the SRP Council meeting during the month and we met face to face - how very 2019! I was on a rather full train heading through sunny Cumbria to the Capital and definitely in a minority wearing a face covering. It seems such a small thing to do, to protect the precious freedoms we are now granted. I do understand it doesn’t protect me much, but it does reduce others risk of getting anything I might have, so that makes it worth it for me.

SRP Council was preceded by the Patron’s Dinner the previous evening, where the Council attendees, our Patron Lord Carlile, and other guests, had a chance to network and build relationships. The Council meeting itself was a success; we closed off a lot of actions, agreed the way forward with some potentially complex issues. We are also collating a list of committee vacancies, so keep an eye on SRP Weekly to see what opportunities are available to get more involved in SRP.

We also held the first planning meeting for the second issue of Radiation Protection Today (SRP’s new magazine) - reviewing the feedback from Issue 1 and discussing what to include in Issue 2. It is due for publication this winter so if you have any suggestions the email is RPToday@srp-uk.org.

If you are wondering what happened with my CRadP application, they requested more information which I have now provided. Fingers crossed!