October: Scream if you want to go faster! 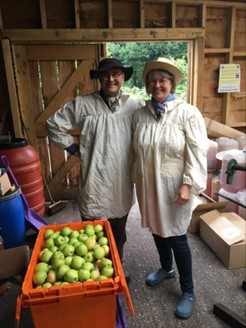 Wow, it is now mid-October 2022, Halloween is just around the corner, and I have just over six months left as President of SRP.  Time certainly flies by when you’re having fun!  It also flies by when there is so much to do…. So perhaps the truth lies somewhere between these two.

My wife and I are lucky enough to have a very large garden, with an orchard and some woods, so indeed there is always so much to do, no matter the season.  In our orchard, the squirrels got to the walnuts before we could, but most of the apples have been picked (except for the Bramleys), with many of them pressed into juice, and some of that fermented to make cider.  We hired an apple press at a local cider museum for an afternoon, and dressed up for the occcasion as we became a live exhibit with the paying customers watching us do the pressing!

To be honest, I’m not normally a cider drinker, but I hope to have some when it’s ready around Christmas time.  Now is the time of year to do some major pruning of the trees in the orchard to ensure a good harvest for next year.  I have chopped down a couple of dead trees in the woods and cut them up into logs for the fire, with the smaller branches chipped to lay down on a path.  We have recently built an arch at the top of the steps leading to the lawn, ready to plant climbing roses.  We have also cleared areas in the borders of old shrubs, and we are just about to plant a rather lovely Magnolia.  I have also constructed some new raised beds on the vegetable patch for next year’s growing season. I just need fill them with soil – about 8 cubic metres – so that is going to be tough.

It's good to have a sauna to help take away the aches and pains after all that hard work.  We built one in the garden last autumn and it really is a lovely way to wind down, especially if there is a beer waiting afterwards!

Things have been no less busy with SRP matters.  We have drafted the next five year Strategic Plan which sets out three key Priorities for the Society, and which is now going to go out with a questionnaire to the membership.  It is intended that we receive your feedback by mid-November so that we can ratify it at an Extraordinary General Meeting on 1st December.

The Strategic Plan will be supported by a Delivery Plan – a live document with specific Commitments that align with the Priorities, and setting out tasks and actions, with deadlines, to achieve those Commitments.  Each action will be the responsibility of a specific SRP Committee to deliver.  As we move through the next five years, actions can be closed and new ones added towards the overall Commitments.  It is hoped that the draft Delivery Plan will also be ready to be tabled at the Extraordinary General Meeting, and I do hope you will all participate in this consultation and give us your views on both documents.

We held a meeting with the Presidents of the Partner Societies earlier in October.  It had been intended to be a face to face meeting in London, however a rail strike meant that it was more sensible to hold it virtually using Teams.  It was very successful with a range of matters discussed, good points raised, and some key agreements on the way forward.  A follow up face to face meeting is intended to be held in the early Spring.

One fantastic piece of news that we shared at the Presidents meeting was that SRP will be hosting the next IRPA European Congress in the UK in June 2026.  I invited the Partner Societies to help in organising the scientific programme for that Congress.  I also suggested that the UK should host one of the ICRP consultation workshops that will be run over the next few years to discuss aspects of the revised Recommendations that will be published towards the end of the decade.

Events Committee is continuing with the organisation of the next SRP Annual Conference in Aberdeen in April which will be a celebration of 60 years of the Society.  There are also other one-day meetings in the calendar, including a workshop on the new IRR17 Consents Process in February 2023, as well as our series of webinars co-hosted with AURPO – so look out for those.

For all of these future events I hope that as many SRP members as possible will participate to ensure we have as much of your experience, expertise and understanding of the issues included in the disccussions, and that we as a Society and profession make a real contribution to the future of Radiation Protection.